This race was on my radar all season, but by the time August rolled around, the excitement to do it had dwindled.  Enter the bronchitis and being sick at Nationals, I opted to rest a week afterwards and sit on it.  The rest didn’t help the bronchitis, but my doc said it was just fine to train so HyVee became intriguing again.  That being said, I didn’t want to feel like I did at Nationals so I didn’t make the decision to race until a couple of days beforehand .  Even then I was still a little apprehensive as I still had a sore throat.

We made the 5 hour trek over on Saturday then listened to a mandatory race talk, picked up my packet, racked my bike, and grabbed some quick dinner before turning in. Oddly, I wasn’t nervous at all, just a bit frustrated with the chance of storms during the race.  Grrr!  I told Scott if they canceled the swim, I wouldn’t do the bike/run.

Thunder and heavy rain woke us up at 4:30am, oy!  I went back to sleep and got up again shortly before my alarm went off, around 5:20am.  Lightning and rain prevailed. I turned on my computer to see if there were any race updates and lo and behold, there were!  HyVee had posted on Facebook that there was a 45 min delay in the start of the race.  I thought about chilling in the room a while longer, but instead drove to the race site as I remembered parking had been a pain (not location wise, but the 30+ minute wait in the traffic line) last year.  That was a very good decision as even leaving early, I still had to wait over 35 minutes in the traffic again.  At least the rain had ceased!  Yay!

Upon entering transition, I heard music to my ears.  There was an announcement that the water temperature was 84 so it was a wetsuit illegal swim. Yea baby!!!  (This is a little advantageous to good swimmers as it doesn’t allow for technically incorrect swimmers to have proper body position.  Without it, they are less aerodynamic which makes it a little more difficult to swim. fyi-Wetsuits create great body positions for all).

Off  to walk to the swim start, which was part way across the small lake. The pros took off first so it was fun to watch them, but I then I became nervous as I couldn’t find Scott and the girls and I had to give him the car keys.  (Scott was smart and brought all their bikes so they biked to the race start).  I finally found them about 25 minutes before my wave.  So then I took to the water to warm up.  Upon exiting, I actually felt a little cold as it was rare for the water temp to be that much higher than the air, 84 versus a cloudy and windy 74.

The swim was a beach start so we had to run a few steps before diving in.  That’s not too common for us amateurs, but a welcome change of pace. Scott took a good pic here with me in the lead. I look like a giant compared to those peanuts!

Being in wave 7, I had to play a game of Frogger weaving around many people. Honestly, I kind of liked it as it presented more challenges and was fun.  Out of the water 1st in my age group, it was an easy transition as I had no wetsuit to take off.  I did wear a speed suit, but that’s easy breezy to get off.

As soon as I started cycling, I felt good, and I felt that way the entire ride.  There were some high winds out there which nearly knocked me off my bike a couple of times (the challenge/risk of using a disc wheel).   The course itself was a little more difficult than I recalled from the previous year, but it wasn’t bad.  Of course perspective has a lot do with this as I didn’t train on any hills this year so any course with a mere bump is a hill to me.  😉  Anyway, a few ladies passed me on the bike, but 2 were 38, one was 28, one was a speedy 48 years old, and one was 40. I knew I had work to do to keep up with her and I tried, but it wasn’t to be on the bike.  Coming into T2, I had no idea how far ahead she was, but I really wanted to catch her.

Off I went and I felt good.  I felt even better after a minute as Scott and the girls were cheering, taking pics & video, and high-fiving me too. I loved it!  But then I looked at my watch, s-l-o-w.  😦  Really?!?  How could I be going so slowly when I felt so good?  I didn’t let it stress me out though, I just continued to focus on how good I felt and how much I enjoy this sport.  AND, I was breathing much better than I did at Nationals, whew!

I never did catch, nor see, the lead woman, but I gave it my all and was ok with finishing in 2nd place. I really did want to win this one, but it just wasn’t in the cards; my swim was a little slow, my bike was really slow, and my run was a little off.  That being said, I can’t complain as I did take a week off after Nationals so I’m grateful I accomplished what I did.  Plus I was able to catch up with a few friends including Seeley G who finished 3rd in the elite wave.   She reminded me one of the things I love about this sport, the people.  Her and her husband are genuine, down to earth, humble, and just good people.

After talking to them, I made a quick trip to the podium before returning home.

Since I spent most of my younger years living in Moline, we had to make a pit stop there to enjoy some Whitey’s Ice Cream, yummy!  It hasn’t changed much since I graduated high school, which was just a few years ago…or not.  🙂  It’s good old-fashioned ice cream and here’s proof  Sarah enjoyed it:

Here are a few more pics from the day: 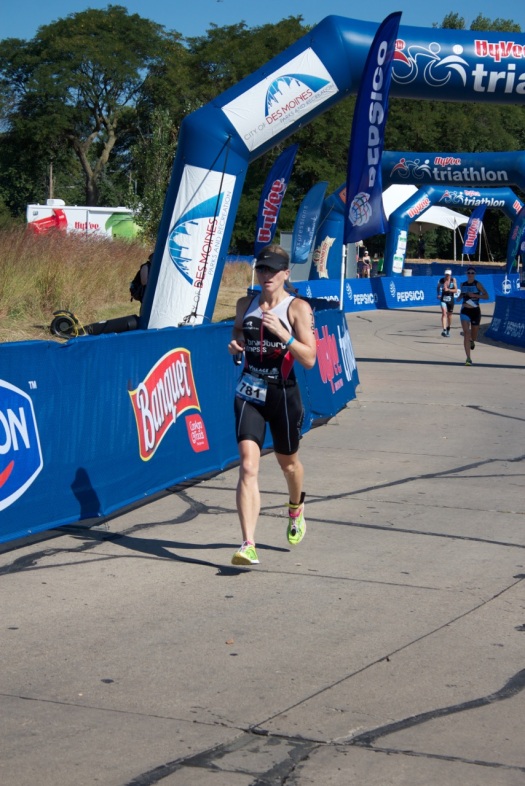 And now, the triathlon season is over!  Yay! Don’t be fooled though, I will be racing this fall/winter,  just not in triathlons.  😉